Discover the Greek Islands from your own luxury private yacht

Charter a private yacht in Greece for a luxurious island hopping adventure in the Cyclades Islands. Begin in Athens, the birthplace of Western civilization where you will visit ancient highlights such as the Acropolis, the Museum of the Acropolis, and the ancient Agora. Then, board your luxury yacht in Athens’ port and cruise towards the Cyclades Islands. Spend the following days hopping from island to island where our expert team members will be awaiting you, disembarking for a variety of active adventures, sightseeing, and immersive experiences. While private yachting in Greece, visit popular islands such as Mykonos, known for its lively beaches and active nightlife, and Santorini, for a magnificent sunset hike around the caldera. You will also have the chance to explore islands that are less frequently visited. Stop at Polyaigos Island to swim at deserted beaches, enjoy a delicious dinner at a local tavern in Milos, and wander through the most impressive caves in the Little Cyclades. Along the way, there will be plenty of opportunities for swimming, snorkeling, and relaxing aboard your luxurious yacht. Blue Parallel will handpick the vessel based on the needs of your group, and all luxury yachts are fully staffed with an attentive captain and crew.

Note: This private yacht tour in Greece is an example, as all of our luxury journeys are custom-made.

Note: This private yacht tour in Greece is an example, as all of our luxury journeys are custom-made.

Your private tour of Greece begins in Athens, one of the world’s oldest cities. You will be taken by private transfer to your hotel in downtown Athens with views of the Acropolis. Once a powerful city-state and a center for the arts, learning and philosophy, Athens was home to Plato’s Academy and Aristotle’s Lyceum, and is often referred to as the cradle of Western civilization and the birthplace of democracy. Its heritage of the classical era is still evident and represented by ancient monuments and works of art dotted throughout the city, the most famous being the Parthenon.

After you settle into your luxury hotel, visit the innovative Acropolis Museum with your expert guide. The museum’s glass design is equal in size and shape to the Parthenon, and rotates the marble sculptures and findings exactly as they were placed at the Parthenon centuries ago. After your immersion into the rich history of the Acropolis, dine at a nearby restaurant with breathtaking views of the Acropolis.

Yachting through the Cyclades Islands (6 Nights)

Embark at the port of Piraeus in Athens for your 6-night private cruise through the Greek Isles aboard your luxury motor yacht. The yacht will be equipped with a dedicated crew giving you the flexibility to alter the itinerary when needed, according to weather or personal preferences. Please see below for a suggested Blue Parallel itinerary centered on privacy and beautiful, secluded locations. Services of personal hosts or guides will also be provided during land excursions when applicable.

After a delicious lunch on board, stop at the uninhabited island of Polyaigos to swim in its crystal clear waters and enjoy its deserted beaches. Continue on to Milos Island, an idyllic place for those who want to experience Greece in all its beauty and skip the crowds found on the more popular islands. Dock for the evening at the main port and enjoy dinner at a local taverna.

Morning departure for Santorini which lies south east of Milos. On the way, stop at Sarakiniko beach located on the north shore of Milos island for a morning swim. Continue on until you arrive at Santorini, the largest island of a small circular archipelago in the southernmost point of the Cyclade Islands. Enjoy boating along the caldera with stops at the famous red and white beaches made of solidified lava for swimming and snorkeling. In the afternoon, disembark at Ammoudi port and private transfer to Oia to take part in an awe-inspiring 2 hour hike along the cliffs of the caldera, passing charming white churches and traditional cave houses with views of the Aegean Sea. End at Imerovigli in time to watch one of the world’s best sunsets.

The next morning, disembark and head to the picturesque town of Pyrgos, one of the least visited villages on Santorini where you will enjoy a cooking class and wine tasting. For those more interested in archeology, you will have the option to explore Akrotiri, a Minoan Bronze Age settlement that was destroyed in a volcanic eruption around 1,500 BC. After your morning activities, return to your luxury yacht and head to Anafi Island, a quiet and unspoiled island located east of Santorini. Upon arrival, stop for a swim at the beautiful Klissidi beach and later disembark to explore the small port town and enjoy dinner at a local taverna.

Your private Greece tour continues in the Little Cyclades Islands located north of Anafi. Spend the morning swimming and exploring the small and tranquil Irakleia Island. Return for lunch on board before heading to Small Koufonisia, an island known for its crystal clear waters and arid vegetation. Spend time discovering its main port scattered with charming white houses, wooden kaiks (brightly colored Greek fishing boats) and a picturesque windmill.

Morning departure for Mykonos Island, north of the Little Cyclades. Before reaching the main island, enjoy a private archaeological tour of Delos Island, a UNESCO World Heritage Site and ancient administrative center. Continue on to the uninhabited island of Renia for swimming in remote coves. Enjoy fresh grilled fish for lunch, then visit some of the island’s most famous beaches such as Psarou, Paradise, Agrari, Elia, Kalo Livadi and Kalafati. In the early evening, disembark at Mykonos town – the famed cosmopolitan destination and nightlife hotspot – for some shopping and sightseeing. In the evening, enjoy a gourmet dinner at one of Mykonos’ best restaurants.

Depart west to Kythnos Island (approximate cruising time: 2 hours) known for its traditional villages, beautiful beaches and rolling hills. On this agricultural island, life is simple and most of its beaches unspoiled. Upon arrival, head to the stunning Kolona beach which connects the island of Agios Loukas with the rest of Kythnos and forms a golden stretch of sand with crystalline sapphire waters on both sides. Only reachable by boat (or on foot), this unique characteristic creates a romantic and tranquil atmosphere. End the day with a farewell BBQ on the beach, prepared exclusively for your party. 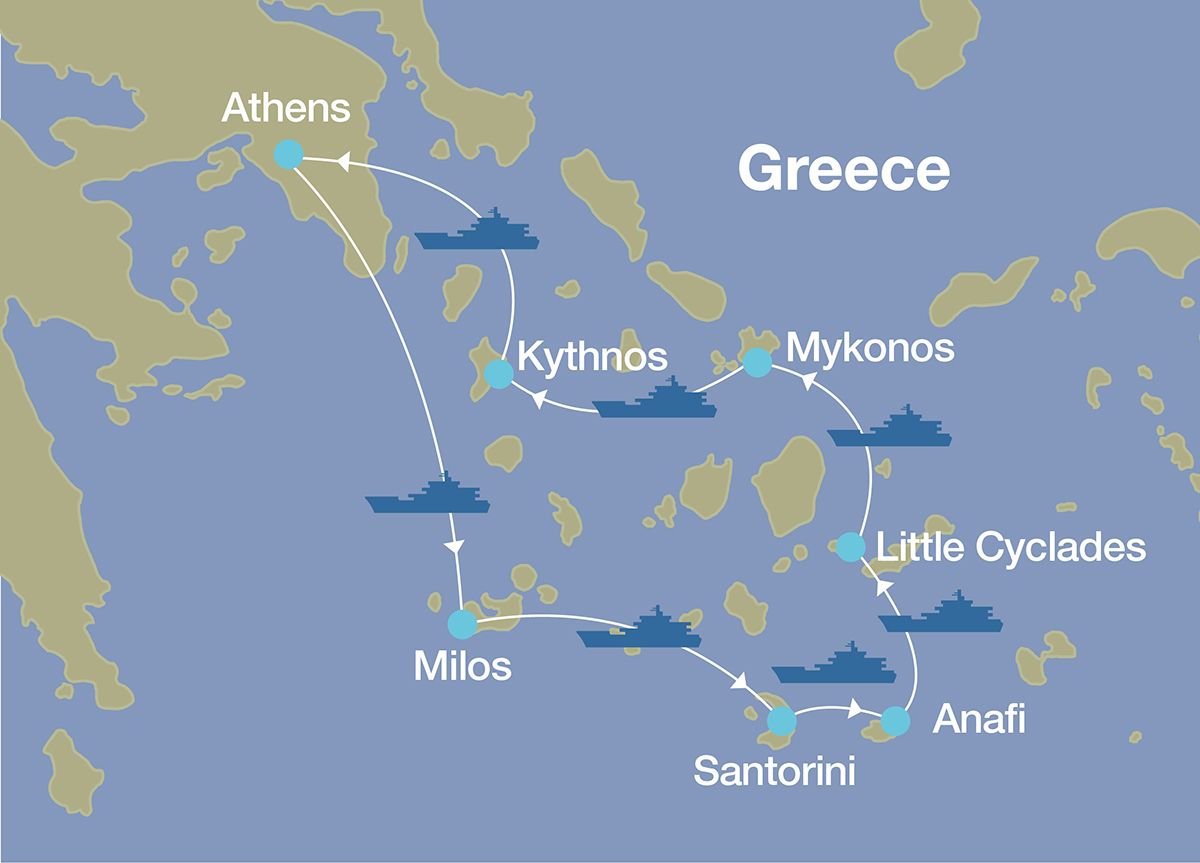 Contact us to tell us more about your preferences and your ideal trip to Greece aboard a private yacht. We will create a tailor-made itinerary for your review.

Our trips to Greece are highly customized and include a choice of sea-based and land-based adventures. Pricing varies depending on the type of itinerary, period of travel, and accommodations, which ranges from a private charter, luxurious land-based lodgings, or a combination of both. Please get in touch with our team of travel experts at +1-301-263-6670 or [email protected] to find out more about pricing and itineraries for our tailor-made Greece journeys. 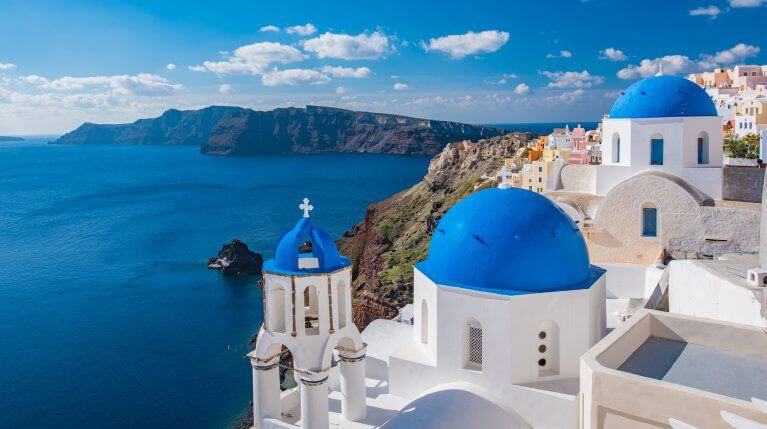 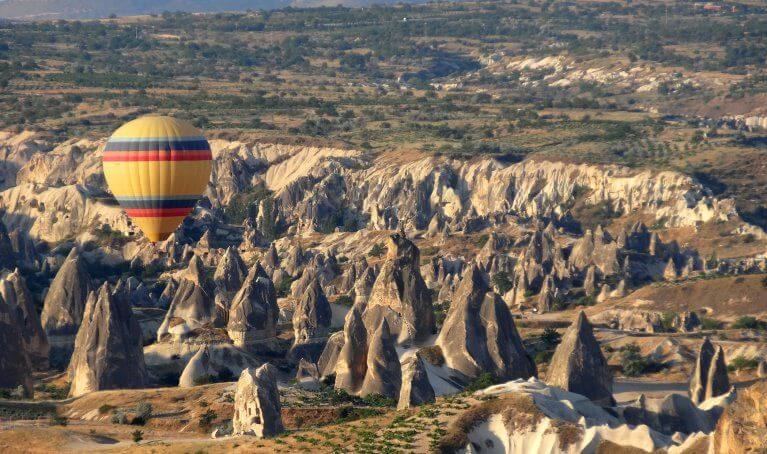 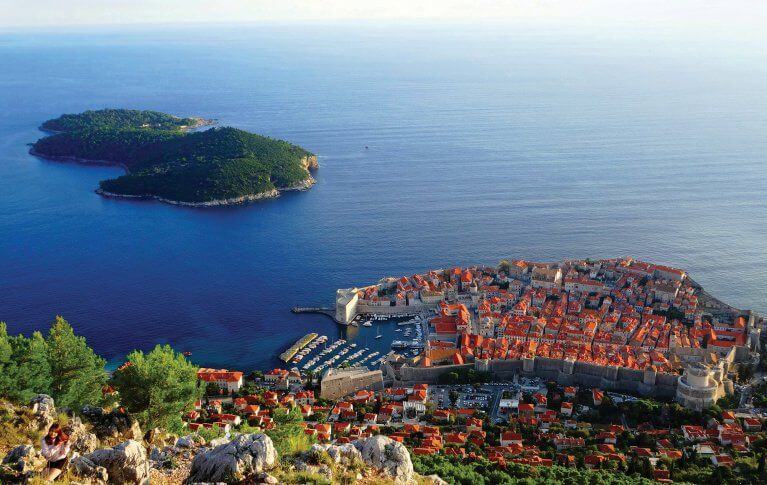